Wealth Shouldn’t be a Requirement for Health

Without insulin, many people with diabetes (PWDs) would die. Its not a luxury item; its a necessity. Endocrinologist Dr. Silvio Inzucchi estimates in someone with 0% insulin production, theyll begin to fall ill within 12-24 hours after last insulin injection, depending on its duration of effectand mortal outcomes would likely occur within days to perhaps a week or two.

According to the World Health Organization (WHO), access to essential medicines is supported by international human rights law (WHO Constitution, 1946 & Universal Declaration of Human Rights,1948). 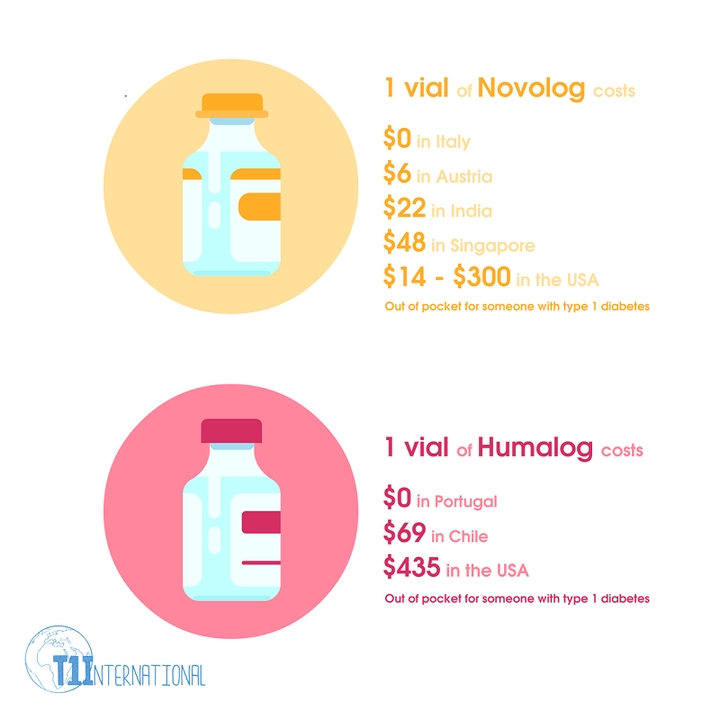 non-profit advocating for access to insulin, diabetes supplies, medical care and education for all people living with type 1 diabetes around the world. They cite several studies:

With recent headlines like, Insulin Prices Are Skyrocketing in Time Magazine, or Treating Diabetes Keeps Getting More Expensive in the Washington Post, an issue that has concerned diabetes advocates for years the rising cost of insulin and the impact that cost has on people living with diabetes is starting to gain exposure.

The exposure intensified last week when Senator Bernie Sanders used Twitter to express his opinions on the drastic increase in insulin cost over the past eight years.

The average price of insulin has gone up by more than 200% in the last 8 years. That type of greed must end. pic.twitter.com/Inyy9NYa7H

The insulin price increase statistics that both T1International and Sen. Sanders are using come from a study published by the Journal of the American Medical Association last April. The study says that the annual cost of insulin per patient rose from $231 in 2002 to $736 in 2013.

For those of us living with diabetes, this is not surprising news to us. There is currently no generic insulin on the U.S. market because incremental improvements have kept insulin under patent until 2014.

The first follow-on (like a biosimilar) version of insulin is set to launch this December, which because of its interchangeability to already-approved insulin, would allow quicker FDA approval and fewer clinical trials, resulting in lower end costs. This is expected to be a sign of relief; in other countries, biosimilars have noted a 15-20% price reduction. One follow-on insulin is approved in the U.S., and other insulin manufacturers are working on developing others.

While many diabetes advocates support innovation towards better-performing insulin, newer brand name insulins are cost-prohibitive for many. Diabetes Mom and Advocate Niki Nichols conducted an insulin price analysis, which makes the case that pharmaceutical companies are not the only players making price decisions. Like Mike Hoskins at DiabetesMine, we agree that this is all crazy complicated. No one seems to have the complete picture, and the modus operandi seems to be to just point fingers and pass on the blame. We support transparency as a first step to help uncover how pharmacy benefit managers, costs of maintaining health plans, and other complex factors are reported to contribute to high costs of insulin:

To put it simply, healthcares severe under-performance is a complex issue, and because of its staggering prices, has leaders in both political parties paying serious concern for the future of healthcare in the United States. As healthcare thought leader Dave Chase describes, Medical expenses are the number one driver of bankruptcy (even for those with health insurance)Both the NY Times and the nonpartisan Center on Budget and Policy Priorities have reported on the tragic consequences of the spending on healthcare waste and over-treatment while roads, airports, bridges and rails fall apart.

Things you can do

Heightening last night, the Diabetes Online Community shares concerns about the proposed repeal of the Affordable Care Act (ACA) which could impact some peoples access to healthcare and insulin:

If the ACA gets taken away how am I gonna afford my insulin? Thats $600 A BOTTLE without insurance. I cant afford that!

Donald Trump campaigned on the platform and plan: [o]n day one of the Trump Administration, we will ask Congress to immediately deliver a full repeal of ObamacareWe will work with Congress to make sure we have a series of reforms ready for implementation that follow free market principles. As we dont know what that proposal would look like, well have to watch in the early months of 2017, and see how that plays out for PWDs, their access to insulin, and their ability to purchase affordable healthcare with an existing condition. The good news is that healthcare is front and center for both parties, and Trump has mentioned his support of patient-centered healthcare, transparency, and Medicare price negotiations. This week, we are in Washington, D.C. with other patient groups, stakeholders, and leaders to begin to make headway on the drug pricing issue. We will represent the PWDs in our community, their concerns, make sure everyone is included in the conversations, and report quality information as the future unfolds. Follow us @D_Advocates for up-to-date information.

Thanks to generous support from these companies, we are able to connect advocates dedicated to improving the lives of people living with diabetes in order to accelerate and amplify their efforts. (Unless expressly specified otherwise, no sponsors of Diabetes Hands Foundation are responsible for the content of our materials including, without limitation, websites and printed materials.

Diabetes Hands Foundation is a 501(c)(3) tax-exempt nonprofit corporation, registered in the State of California and the IRS, under EIN #26-2274537. Please consult with your personal tax advisor as to the deductibility of your donations. Tax laws may vary on the basis of the donor's residence and personal tax and income situation. | Special thanks to the Grandma Sandy Fund for their continued support of Diabetes Hands Foundation programs.